Studio time has been a bit scant these past six weeks, with one illness after another.

Mid-March, I came down with a severe sinus infection… which led to bouts of coughing fits that ultimately caused a pinched nerve in my back which affected the entire left side of my body, resulting in numerous trips to the chiropractor to attempt to correct it… and the past week and a half I have been dealing with walking pneumonia (yet MORE coughing)… so to say that I am looking forward to a healthy and productive stretch is a colossal understatement.

Although not completely 100% yet, I have been able to start spending more time in my studio and have been assessing the status of the Pismo Series and the direction the project was going in… and then I came across a VERY old idea that I had played around with when I was in college when I found an old portfolio of mine earlier this week. I am ashamed to say that I had completely forgotten about this portfolio and when I examined it, I had discovered that most of it’s contents had suffered water damage.

At the time that this work was completed, I had been completely obsessed with Wassily Kandinsky and his idea he had that you could “see” and “paint” music (honestly, that idea still remains one of my strongest influences). I also was heavily into Pink Floyd (still love them!) and was captivated by their ideas and would lose myself for hours in their more instrumental songs: “Shine on You Crazy Diamond”, “Echoes”, etc.

I had conceived a project for my senior year in college that would allow me to combine these two loves: Kandinsky and Pink Floyd into my own version of “painting music” and some of the work from this series was contained in the ruined portfolio.

I wish I had the foresight at the time to have consistently NAMED my experiments – or at the very least, had made a notation of the piece of music I had been listening to, because only a couple of them have names scribbled on them. It appears that all of the ones that are posted below were completed in April of 1990: 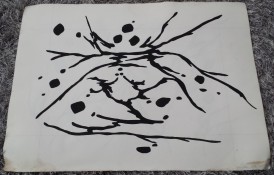 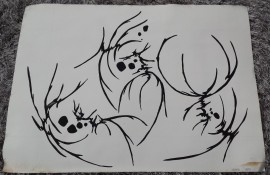 You can clearly see Kandinsky’s influence in this work and it did get me thinking about how I could be more spontaneous with the direction the Pismo Series could go in and how I could begin to incorporate a more organic, freestyle approach to the overall look of the Series.

As you know from previous blog posts, I have several “failed” attempts of Pismo letters as I developed and worked out the kinks for the Pismo Series… and I am seriously considering experimenting even further by adding this new “old” idea to these “failures”.

You never know: this could be the push this series needs to take it to the next level… or it could be the idea for an entirely new series altogether.

This morning, I spent some time working on the overall design of “Pismo 5 (E)” and although I am liking the direction it is going in, I think I will take a short break from it and see if I can “see” what the patterns could evolve into:

Looks like this one will be added to the studio wall with the rest of the incomplete Pismo Series for a week or so until further inspiration strikes:

If you enjoy the projects, pictures and posts, please see free to comment – feedback is encouraged and is always welcome.