I woke up earlier this week with an image in my head and ended up re-starting a series that I had abandoned almost two years ago: the Bagua Project.

From Wikipedia: “The Bagua or Pa Kua are eight symbols used in Taoist cosmology to represent the fundamental principles of reality, seen as a range of eight interrelated concepts. Each consists of three lines, each line either “broken” or “unbroken”, respectively representing yin or yang. Due to their tripartite structure, they are often referred to as “trigrams” in English.”

I only completed 3 of the planned 8 pictures for the original Bagua series, so it will be relatively easy to start over with new project parameters and goals. The original series was designed to be a single picture per nature, 15 x 22 inches – the same size as my I Ching series… and I just feel now that I need to move on from that size. My new Bagua series will be designed to be two 12 x 12 inch pictures that will be displayed as twin pictures, totaling 12 x 24 inches.

I completed one 8 x 8 inch twin pictures as part of my Journal Project last January – “Seven Nation Army” and I have been fascinated since then with the idea of one design over multiple pictures:

I also completed a 4 picture design I called “Totem” last summer that has elements that I a interested in incorporating into the Bagua series. The total size of the picture are four squares, 6 x 6 inches, so the total image is 6 x 24:

The initial design for the first picture in the Bagua series will be Li (Fire): 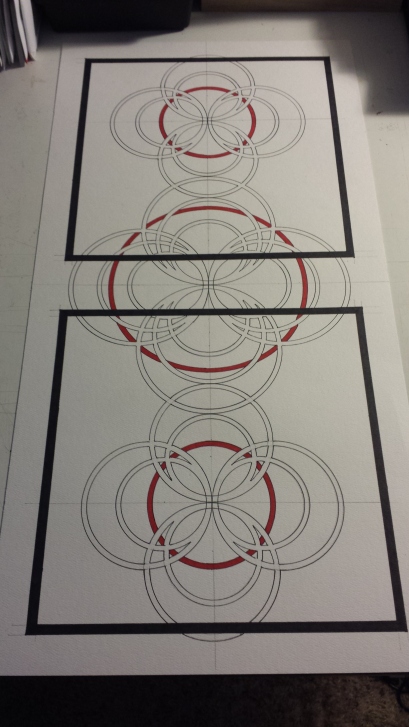 The picture will also include the trigram associated with Li (Fire) and after looking at the design, I think I am happier with it being portrait instead of landscape.

I am still in the early stages of the picture – still in the design phase – but I feel it is off to a good start and am hoping to be able to push the design to a new level and discover new shapes.